THIS IS A FILM JOHN SEBASTIAN VITALE AND I DIRECTED, WE TOOK A LONG TIME MAKING IT IM NOT GOING TO SAY MUCH ABOUT IT.. BUT HERE IS WHAT FRANK151 SAID ABOUT IT. 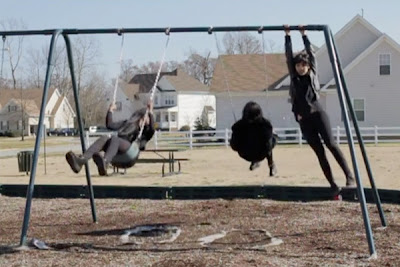 There are three black goth girls, one moves away and leaves, the other two have to recruit a new girl, and all thats left are white girls. So they recruit a white girl, she gets bored with them and leaves too. The only person left to recruit in their crew is this 9 year old little white girl who was walking thru the park.
Theres a scene where one of them is riding a Chopper Bicycle through the pitchers mound, while the other two are crossing medieval swords over her head. While this is happenening, there's smokebombs and fire extinguishers going off around them.

This morning, Richard sent us his final cut of Magick Margaritasville and certainly wasn't kidding around. Three beautiful goth friends sing top 40 songs within a seemingly bright and quiet suburban neighborhood. I will leave the rest open to your interpretation. Enjoy.

Posted by Richard Perkins at 2:55 PM